Tibbalds CampbellReith were commissioned by Homes England to provide a wide range of services in relation to Town Planning, Masterplanning, viability,  utilities and ground investigation, with the initial aim of securing residential development on the site as quickly as possible.

The original scope of the appointment was to remediate the site, reconfigure the utilities and adapt the existing outline planning permission by increasing the number of residential dwellings, it became apparent that this would incur over £2m of CIL charges and thus the overall strategy changed to ensure the planning application was kept alive, but at the same time making changes to make it more attractive to developers.

Given the lack of appeal to developers, viability, unit mix and market appetite for disposal of the scheme was high on the agenda when developing the final proposals.

Soft market testing, by our team member AspinallVerdi, with the Developer Panel was undertaken at a very early stage and this indicated that the market would seek to deliver between 75 and 150 units within the first phase. Key issues were identified for discussion and feedback which formed the basis of further testing.

This has informed later stages of work including viability and marketing/disposal of the site.

As part of the process we completed market intelligence gathering, including a New Homes Outlets Review to understand the number of outlets in relative close proximity which will influence supply and sales values in the area.  Here we established the scale, housing mix (by type) and sales asking and achieved values and also aim to establish the ‘sales rate’ (or speed of take up).

Following an appraisal of the outline planning permission and gap analysis, detailed pre-app discussions were held with Durham County Council, to agree changes in the phasing, the minimum number of units to be included in phase 1 and other amendments all to be treated as minor amendments and Reserved Matters applications.

These discussions allowed phase 1 to be limited to 90 units and the remainder of the site to be re-phased so that the development parcels were more suited to the proposed masterplan and appealing to developers and delayed delivery of the commercial element towards the latter stages of development.

Site Investigation: Our services included delivery of all aspects of work from reconnaissance, tendering and managing the ground investigation through to remediation design. MD2, a local consultant, was included within our team to support our own geo-environmental specialists by providing local support with the management and interpretation of the investigation.

Utilities: The complex arrangement of the existing private network infrastructure and the interested parties (Homes England, Thorn Group, Northumberland Estates, tenants, IUS and NPG) complicated the application. However, through careful consideration and close engagement with them we believe an appropriate strategy was developed and implemented.

Phase 1 Reserved Matters Application: Tibbalds CampbellReith were supported by TEP and JDDK to submit a Reverse Matters Application for Phase 1. The scheme was designed in accordance with the Outline Application Design Parameters which includes Disposition of Built Development and Open Space; Scale; Form and Massing; Density; Landmarks; Access; and Indicative Movement Framework.

In conjunction with the planning, Tibbalds CampbellReith prepared detailed designs for the primary infrastructure which has included ground remediation, utilities diversions, highways (main boulevard), drainage and S278 works. These works were managed by CampbellReith under a NEC3 contract. 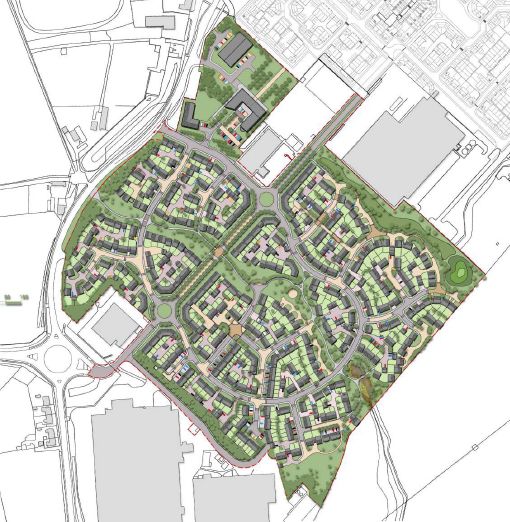