The College of North West London is located in the London Borough of Brent with two campuses based in Willesden and Wembley. The college’s curriculum focuses on Construction, Engineering and Technology with an aspiration to engage with the STEAM agenda to deliver specialisms in science, digital and creative media.

Following the completion of an accommodation strategy review in 2015, it was recommended that the college should seek to dispose of a proportion of their campuses, to raise capital receipts that could be reinvested back into the college to provide new education accommodation.

Through the Homes and Communities Agency Framework, the Tibbalds CampbellReith joint venture was invited to submit a tender for the delivery of a masterplan and control option for both campuses including a RIBA Stage 2 report to enable the college to procure a Developer Partner for the redevelopment works. A multidisciplinary team was assembled with CampbellReith as Lead Consultant and a number of specialist consultants including a Planning Consultant, Project Manager, Architects, Cost Consultant, MEP Consultant, Landscape Architects and a Property Consultant. The team were successful and tasked with maximising the potential for the college and their development Partner through the redevelopment of both sites.

CampbellReith led the design team through a detailed process by firstly gaining an understanding of the college’s curriculum aspirations and then responding with the necessary technical input to produce a brief for the works. Through the spring and summer of 2016 the team developed a series of options for both sites involving various levels of housing provision, commercial areas and new education accommodation.

One of the key challenges, particularly for the Willesden Campus was balancing the required amount of teaching accommodation with the number of residential units needed to fund the development at the same time as keeping within the development constraints set out in the GLA’s London Plan and by the London Borough of Brent’s Planning officers. The team held a number of meetings with the planners and the GLA to explain the vision for the masterplan and incorporate comments from then into the final Stage 2 report.

The Tibbalds CampbellReith Joint Venture team responded to several key technical issues during the course of the works including the need to accommodate Network Rail’s requirements into the design as the development proposals included the construction of high rise residential towers in close proximity to an existing railway embankment at the Willesden Campus. The team liaised with Network Rail to establish the requirements of the Asset Protection Agreement.

One of the exciting aspects of the Wembley proposal was the possibility of providing a gateway landmark building as the site was located at the top of the Olympic Way which runs from Wembley Park station to the national stadium. The team liaised with the planners and the GLA to determine a maximum height permissible on this location, resulting in a four storey college with a 22 storeys of residential provision above.

Transportation was also a challenge for both sites with concerns regarding appropriate parking levels and adequate servicing routes. The Willesden Campus benefitted from a good Public Transport Accessibility Level (PTAL 4) and the adopted transport strategy sought to utilise the sustainable Bus and London Underground linkages with reduced resident vehicle parking levels. With the Wembley Campus, a Car Free development was progressed given the excellent PTAL rating of 6 and close proximity to Wembley Park Station.

An outline cost plan was produced along with a financial report to assess the viability of the developed scheme. The masterplan proposals were tailored to suit and the RIBA Stage 2 report completed ready for inclusion into the procurement package. 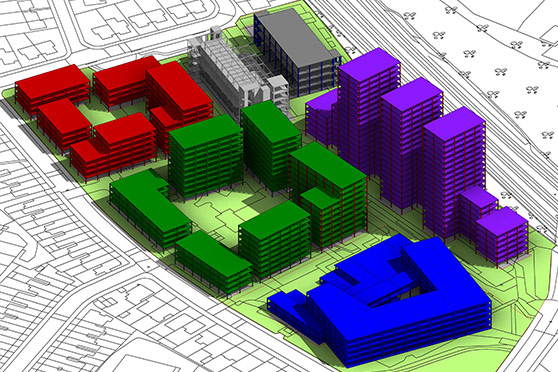