Nottingham City Council/ County Council appointed MVA (now known as Systra) through the Tibbalds HCA Multi-disciplinary Team to carry out transport modelling for the Nottingham Housing Market Area.  The Councils considered that using a mini-competition process for selected members of the HCA Multidisciplinary Framework Panel of consultants was the most streamlined way to commission the work.

A need for housing and employment growth in Nottingham and Erewash had originally been identified in the Regional Spatial Strategy (RSS).  The Housing Market Area Team were charged with ascertaining the best options in terms of location, impact, size and type of development and come up with mitigation proposals, to feed into the emerging Local Development Framework (LDF) Core Strategy.  MVA’s transport modelling was an integral part of this process using a variant of the Nottingham Multi-Modal Transport Model.

The assessment investigated local and area wide traffic indicators including delays, volume to capacity ratios and network speeds for each scenario.  Comparative analysis between the scenarios was also conducted.  The results from this analysis were key to the development of a Mitigation Strategy, which adopted a sustainable and hierarchical approach that prioritised the more sustainable solutions. 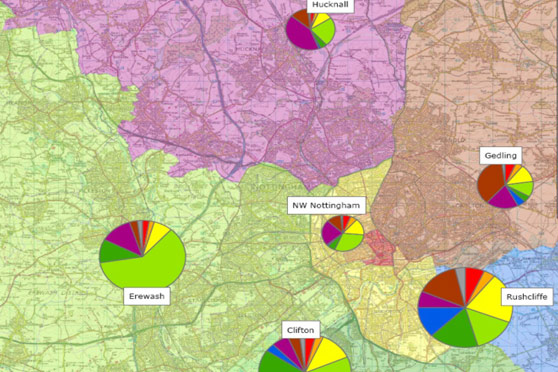